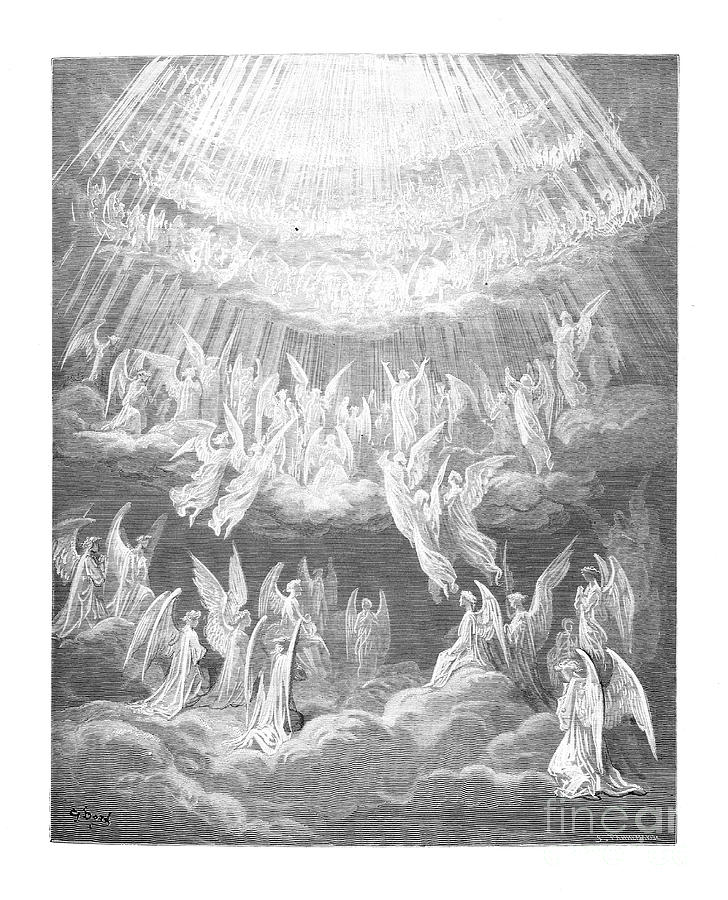 Dante Paradise by Gustave Dore u11

Dante Paradise by Gustave Dore u11

Paradiso ("Paradise" or "Heaven") is the third and final part of Dante's Divine Comedy, following the Inferno and the Purgatorio. It is an allegory telling of Dante's journey through Heaven, guided by Beatrice, who symbolises theology. In the poem, Paradise is depicted as a series of concentric spheres surrounding the Earth, consisting of the Moon, Mercury, Venus, the Sun, Mars, Jupiter, Saturn, the Fixed Stars, the Primum Mobile and finally, the Empyrean. It was written in the early 14th century. Allegorically, the poem represents the soul's ascent to God. From the Divine Comedy by 14th century Italian poet Dante Alighieri. 1860 artwork, by French artist Gustave Dore and engraved by Stephane Pannemaker, (1868), Cary's English translation of the work. Dante wrote his epic poem 'Divina Commedia' (The Divine Comedy) between 1308 and his death in 1321. Consisting of 14,233 lines, and divided into three parts (Inferno, Purgatorio, and Paradiso), it is considered the greatest literary work in the Italian language and a world masterpiece. It is a comprehensive survey of medieval theology, literature and thought. The new non-dialect poetic language Dante created became the basis of modern Italian.